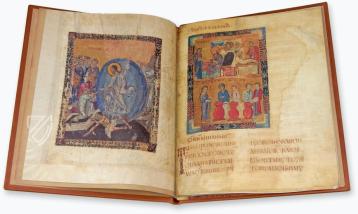 Important note = I use the Revised Common Lectionary website of the Vanderbilt Divinity Library to check the lectionary readings for each Sunday.

Introduction = What are “lections” and how are they formatted?

The beginning of a new liturgical calendar is almost upon us. The first Sunday of Advent year B. Which gives me the opportunity to do a few things.

So henceforth the lections files will include (1) ESV (2) CEB (3) NRSV (4) LXX aka Septuagint (if applicable) (5) MT aka Masoretic Text (if applicable) and (6) GNT aka Greek New Testament (if applicable). I also insert a page break so that no one page contains more than one lection or portion thereof. 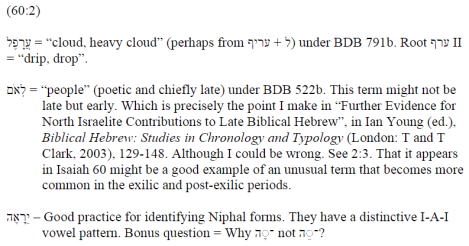 Introduction = What are “Hebrew notes” and how are they formatted?

For three years I taught Biblical Hebrew at a state university. Many of the “Hebrew notes” were prepared for my students who would use them to practice reading Biblical Hebrew. So there are comments and explanations designed to help students understand and analyze Hebrew words and phrases. I removed many of these explanations and comments to adapt them for my own use. That is why some files have names like “Psalm 50 for alone” which means “notes for my class edited so they are for personal use”.

I am a minister who has followed the lectionary for most of my adult life. For the last three or four years I have been trying each week to read and make notes for the Old Testament lections for that Sunday. Doing this once or twice each week eventually adds up. And yes I missed some weeks. Over time I have changed how Hebrew notes are structured and formatted and have started work on editing them for consistency.

Hebrew word = definition in the Brown-Driver-Briggs lexicon* under which page side a (left) or side b (right). Occasionally mention rarity. Cognates. Root. Note = Earlier sets of notes do not always list cognates or root. That is a habit I started later.

*Why Brown-Driver-Briggs? Simply because it is such a widely used standard reference. In graduate school I used Kohler-Baumgartner almost exclusively. (Am unable to find a link to it on Amazon. Perhaps that edition is no longer available.) Which means the hundreds of pages of notes I took in graduate school and seminary are not “compatible” with how I now prepare Hebrew notes.

Introduction = What are “Greek notes” and how are they formatted?

I had about two and a half years of Greek. One year of Attic, some New Testament Greek, more New Testament Greek in graduate school then again in seminary, then Advanced Greek. Which technically is three years but about two years in terms of how advanced. I have studied it but although I once was proficient have not used it much in the last several years. I know almost nothing about textual criticism of the New Testament. So Greek notes – at least for now – are much simpler than Hebrew Notes. Vocabulary references are to Bauer, Arndt, Gingrich, and Danker, A Greek-English Lexicon of the New Testament and Other Early Christian Literature, 2nd edition (1958) abbreviated BADG. . Unlike Biblical Hebrew I am not sure what is a widely used “standard” reference grammar for Koine Greek.

Update 2018-10-09 = On July 11 2018 I obtained a copy of Bauer, Danker, Arndt, Gingrich, A Greek-English Lexicon of the New Testament and Other Early Christian Literature, 3rd edition (2001) and since then have used it exclusively. Abbreviated BDAG. Time permitting I will go back and revise Greek Notes prepared using BADG.

Update 2018-02-21 = So far I have posted ten sets of Greek notes and have included references to A Syntax of New Testament Greek by H P V Nunn. I also tried including references to Greek Grammar Beyond the Basics by Daniel Wallace. References to Nunn are fewer and shorter. The grammar by Wallace has many more references and are generally long. I have not yet decided which reference grammar I should use.

Update 2018-04-01 – Feast of the Resurrection = I now have a copy of Going Deeper with New Testament Greek by Andreas J Kostenberger, Benjamin L Merkle, and Robert L Plummer. The authors state clearly it is intended to serve as a textbook not as a reference grammar. However I am hoping it will serve as a reference grammar that is less cumbersome than Greek Grammar Beyond the Basics by Daniel Wallace. Kostenberger et al will be abbreviated KMP followed by a page number. I will continue searching for a simple reference grammar similar to Williams’ Hebrew Syntax.

Update 2018-04-17 = Text critical notes. I have started adding text critical notes to the Greek Notes. I am not well versed in textual criticism of the New Testament so am keeping them simple. Text critical notes are from The Greek New Testament, 3rd edition (corrected), United Bible Societies. See ibid., xii-xli. Purchased when I was an undergraduate so somewhat dated. The GNT uses the letters A, B, C, and D to indicate the realtive degree of certainty for that reading. I do not attempt to list every manuscript and fragment but only the first few for each reading – sometimes more if I think they are interesting. Perhaps with more time and study I can make the text critical notes more informative.